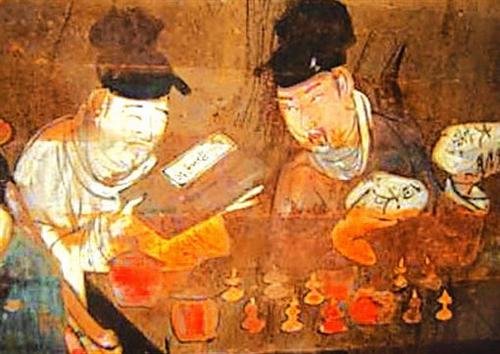 China has one of the oldest medical systems in the world and Traditional Chinese Medicine, or TCM, covers a wide range of philosophical frameworks and treatments which have morphed and changed over the past 2,200 years. The procedures that are used today, such as acupuncture, massage, moxibustion, bleeding, cupping and Chinese herbal medicine may be different in our modern times but they all have ancient foundations in Chinese history.

Chinese medicine began in the Shamanistic era of the Shang Dynasty Period, which was 1766-1122 BC. At this time the religious deity was called Shang Di who was believed to live in heaven with dead ancestors. Shang Di believed illness was caused by either a demon entering the body, or by upsetting an ancestor and consequently being cursed. Shamans would act as mediators between the people, and Shang Di and the ancestors. They would write on ‘oracle bones’, often made from scapular bones or tortoise shells, which were then heated and pierced with rods until cracks formed in them. Shamans would interpret the cracks to answer the question at hand, and the answer was said to reveal the will of the ancestors.

The theory around traditional Chinese medicine developed when philosophy and science began to overlap, in the Zhou Dynasty Period, 475-221 BCE. Ideas began to shift from shamanist views to a more systematic and comprehensive medical framework.

Scholars examined and collated several texts and created a coherent Chinese medical philosophy and many of our practices today are embedded in these texts. Most notable is the earliest known record of Chinese medicine, the Huangdi Neijing (The Yellow Emperor’s Inner Classic) from the 3rd century BCE. Huangdi is thought to have begun his rule as emperor in 2697 BC and this text contains conversations between Huangdi and his physician outlining the concepts for TCM that are the basis of today’s practice. It included acupuncture and moxibustion as tools to correct imbalances and for treating illnesses – although primitive acupuncture used sharpened stones and long sharp bones on the body’s acupuncture points, so the procedure we know today is much more enjoyable.

Traditional Chinese medicine aims to prevent illness, or heal the body and mind by restoring and maintaining yin and yang balance. The Huangdi Neijing and other ancient Chinese medical texts explained that good health was closely linked to the movement of blood and ‘qi’ in the body, and that illness was caused by deficiency, stagnation, excess or improper flow of qi or blood, causing an imbalance of yin and yang.

According to Chinese culture, qi, pronounced ‘chee’, is believed to be a vital force or vital energy flow forming part of all living entities. Qi is the central underlying principle in traditional Chinese medicine and its network connects organs, tissues, veins, nerves, cells, atoms and even consciousness.

Over the centuries, TCM developed to become standard medical therapy in China and was combined with diet, massage, bleeding, moxibustion and Chinese herbal medicine. In the 17th century, interest in traditional Chinese medical practices waned due to thoughts of  superstition and an outdated approach. With the rise of western medicine in the 20th century, it declined even further. In fact, acupuncture was outlawed in China in 1929, until 1949 when a new government allowed it and other traditional medicines to be used again.

Research facilities started to open in China in the 1950s and it was then that acupuncture gained traction in neighbouring countries. In the 1970s a journalist from the New York Times was treated with Chinese medicine following emergency surgery while he was in China. He was so impressed with his treatment and recovery that he wrote an article which increased the acceptance and popularity of acupuncture to the western world. The president of the United States, Richard Nixon, also visited China in the 1970s and on his return advocated for the use of TCM in the US.

Chinese medicine looks quite different to how it would have looked 2000 years ago but it is still renowned for having amazing results on overall health and wellbeing. Reputable and fully trained practitioners of traditional Chinese medicine have a practical and results-based focus to obtain and maintain optimal health and may work in conjunction with western medicine specialists such as physiotherapists and general practitioners. It looks like TCM will be around for a long time to come.